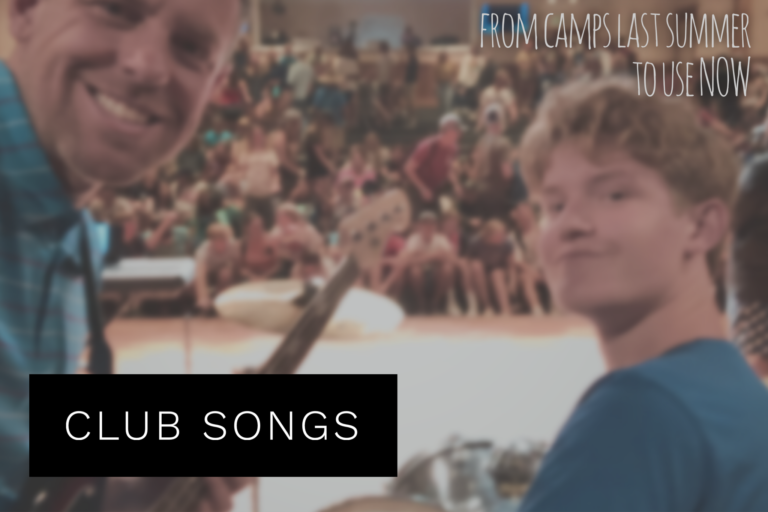 I sat down a few weeks ago, once again, to try to dig up some new club songs. Then it hit me.

Why am I doing this?

I realized that YL recently chose the most talented people to pick songs for clubs. These people were at YL camps last summer leading music. They spent time sorting through the options. They are younger and hipper than me. They might not have done it perfectly, but I may as well put their hard work to good use. Their song selections were likely sitting on the hard drive of every club room computer at every YL camp. I knew what to do next.

I emailed every YL camp and asked them to email me their song lists from last summer.

Then I emailed again.

I am super thankful for the nine YL camps that emailed me back. Thanks Carolina Point, Castaway, Crooked Creek, Frontier, Malibu, Saranac, Sharptop, Timberwolf Lodge, Trailwest!

I worked through all of the lists. Some sent snapshots of their file folders, others sent pdfs of every slide from every club!

I made a list of the 224 songs that were sung at YL camps this past summer.

Then, I had some fun, I’m talking Excel-geek fun. Boohyah! A few text-to-columns functions, filters, and pivot tables later, I had it. More information than you probably would ever be interested in. It is all below.

I hope it is helpful and saved you a ton of time so you can, instead, spend that time in relationships with people (and not Excel, or Ultimate Guitar, or Keynote… but actual people).

I also put together a zip file of all of the songs below with chords and ppts – you can get that HERE.

One other note: My area went to Lake Champion last summer and the music team did something cool and innovative. They played kareoke tracks of modern-ish songs but used a live drummer to give it a “live” feel. They switched to an acoustic guitar for the worship song. It worked really well.

If you were to walk into an average summer camp, this is the most likely playlist you would have heard last summer:

Real quick, and this is not the point of the post, but it isn’t difficult to notice the drastic lack of diversity in our music. You likely knew this already. My research proved it. We can and should do better.

After scouring the complete list of songs, I created several updated playlists I will be doing in my club this semester:

If you would like to see the entire list of songs and how many times they showed up in summer camp playlists, you can download that file HERE.

PS: If you made it this far, wow. If you are looking for campaigner resources, I created a new one, you can read about it HERE.