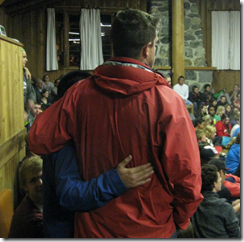 I’m going to speak a bit candidly… There was a time in my neck of the woods where there were not enough spots at summer camp for everyone who wanted to go. This meshed nicely with the purpose and intent of YL camp, to introduce people to Jesus (and help them grow in their faith). There are lots of good reasons why kids who have already heard the gospel at camp may need to go back, and there are lots of good reasons why this is not a good idea, but when there simply are not enough spots, the situation is simple: you better have a good reason to go again. This may have included a leader vouching for a specific kid, a challenge thrown down by the leader such as bringing a certain number of kids to camp who have never been to camp, the student going as a junior leader, etc. Then there seemed to be a change, either there were empty beds at camp or weeks added to YL camps that were not filled, and/or, due to the economy, there were not as many kids who could afford camp (or could be fundraised for to go to camp), and there were now more spots available at camp. Also adding to the equation was the growth of Wyldlife.

All of this adds up to a story that I can tell you. Lots of times over the years I have been on the ropes course helping kids. One of the questions I ask pretty much every kid is, “have you ever been on a ropes course before?”, usually followed up by, “have you been to Wyldlife/Young Life camp before?” Last summer I was doing this at a Wyldlife camp and there were quite a few kids who would say, “This is my third time to Wyldlife summer camp, and I’ve been to all the weekend camps too, so this is my sixth time here.” Sometimes leaders were bringing their 5th graders to camp too. I’m sure this is not news to anyone who has been around for a while, and it is not only a WL issue, it continues on up to YL. On the other hand I have received a memo from another division because I was 1% over their second timer policy at a recent summer camp.

When I was in high school there was a girl at my club who was a lot of “drama”. This girl was loud, wild, created all kinds of problems and didn’t cooperate with anything at summer camp, including the cabin times and anything to do with the spiritual aspect. The following year, she wanted to go to summer camp again (funny how that happens huh?) The leaders got together and really did not think it was going to be a good idea to bring her again, so they threw down, what they thought, was an unreachable goal. They told her she could not go to camp unless she brought 15 people who had never been to church or YL camp. Guess what? You know the answer. She did. And she met the Lord. And she now has a wonderful Christian family and many of her friends met the Lord too.

I have friends that are doing a great job with “rites of passage” and other approaches to successive and sequential camping plans. But I am interested to know what works for you. In our area we are taking another look at our second timer policy for this summer. I am specifically interested in what you do with second, or perhaps third timers, at summer camp. What do you do with campaigner kids? What do you do with kids who do not yet know the Lord? Do you have a plan? Do you use the national policy or a variation of it? Does it work? Is it enforced? What have you learned? I am aware of the official policy and the second timer training manual (which is from 2001 I believe).

Thank you in advance for your help! (Also feel free to email me if that works better… s mcgever at gmail.