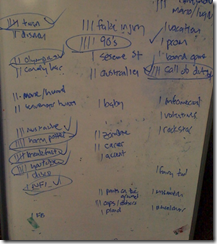 Each semester my I lead my team and others through a club planning meeting that is really a collaborative effort to benefit from the power of effective brainstorming. If you are curious, here are the steps I go through:

1. Clear a lot of time – This meeting take 3-4 hours. If it includes food it might need a little more time. As much as possible don’t let people come late or leave early. You all need to be “all in” on this one.

2. Come ready – I ask every team member, perhaps most importantly the junior leaders, to bring 3 new club themes complete with a mixer, participation game, and skit. These need to be written down. The team leader should also look in advance at the school schedule and any other plans that may need to be taken into consideration, such as homecoming week, days when there is no school, etc.

3. Steal ideas – I come ready with not only my own ideas, but the ideas of other clubs. I email some friends and get theirs, I also check out several other sites as well (younglifeleader.com, yldigital.com, ylhelp.com) [And yes, I actually use ylhelp too, it is easier to search than my computer!]

4. Everyone shares all their ideas – When we first get together, usually after a short devotional, we go around and say our club ideas and write them on a white board or big piece of paper. Do this with minimal explanation. So just say the name of the club, maybe a sentence to describe it if needed and move on. This part is very important… do not, I repeat do not, rule out ANY idea. This is one of the keys of brainstorming. Even a random, or seemingly bizarre idea may be the pathway to an amazing idea. So don’t rule anything out! [One time someone brainstormed a boxing match for charity between the school principal and a YL leader during lunch at the school… bizarre idea but it could lead to a something really creative!]

5. At this point don’t rule anything out – it is important enough to say again, do not rule out any ideas (yet).

6. Do a brief review or explanation – After all the ideas are on the board, go back and see if any need an explanation to make more sense. [Like our Kentucky Derby Club last year.]

7. Consolidate – See if there is any overlap in ideas. For example, 70’s club and disco club.

8. Each person picks their favorite 5-8 clubs – Have them write these down on a piece of paper.

9. Silent vote – Have everyone close their eyes and while the team leader says the club name and then records the “votes”.

10. Pick the top clubs – Pick the clubs that have the most votes. This is where the team leader should use some experience and wisdom and should, if needed, use their role to override anything that might not work. (For example Jersey Shore Club for us.]

11. Break up into teams to plan in detail – At this point we take the ten or so clubs we usually have per semester and break up into small teams to make detailed plans. Usually each group has three clubs, and technically speaking each club should have a roughed out plan in place already, but this is where we nail down the details.

12. Come back together to discuss the plans – After about a half an hour, we come together and explain the plan for each club. Other team members can chime in with their own ideas to help as well.

13. Have someone write all of this down – This is key, someone needs to record all these great plans! Then, it is the role of the team leader to write out the detailed plans complete with assigning the roles to the leaders for each week. In our club the team leader also decides the speaker for each week.

We have followed this process for many years and it has produced a lot of fun clubs that are the collaborative effort of the entire team. Sometimes we come up with ideas that I think are really strange, but I allow myself to be overruled if it is just a matter of preference.

The main benefit is that planning all of this in advance allows our team on a week to week basis to focus on relationship, prayer, discussing contact work, and all the other important things that are so hard to get to when club plans are always being winged on the fly.

How do you plan clubs? Is it similar? Different?