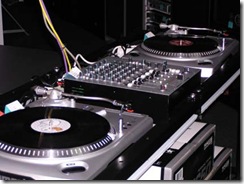 Maybe we should have turntables at club..? Here are my reasons:

I have seen turntables in YL clubs. Over 10 years ago I helped out an urban club. I played 2-3 songs on the guitar, but they had a DJ spin tracks inbetween skits and transitions. Also in November, the music team at weekend camp had a DJ. Imagine Brown Eyed Girl with scratchin’, yes they did it.

I gotta be honest, I’ve never tried it. But being somewhat musical I think I’ll give it a try. One of the leaders today said a friend has one we can borrow. Any tips would be appreciated.

P.S. I’ve been a high school basketball coach for 6 years now and pretty much none of them like club. This might appeal to my basketball guys who think life, basketball and rap are all the same thing. Efrem Smith got me thinking about this at ASC08.

3 thoughts on “2 Turntables and a Microphone?”