Color Chaos is an event similar to the color run type events. Basically we run a YL camp messy games culminating in a color/paint event at the end where each school tries to get their school colors on the other schools.

Below is a complete run down of what we did. It may be easier to read in a pdf, for that

Here is the general outline for the prep and event:

3. Prep the materials and the event

5. Post-event: Clean up and pics online

The right location is critical. Ideally it will be centrally located. Furthermore, you need access to water, potentially lights, and obviously the area needs to be available.

I looked into the sunset time for our date and it was well before our normally club time. We normally have most clubs in our area from 7:15-8:45 or so. The sunset around our time of year was 6:52. So we looked for an available location with lights. As it turned out, none, absolutely none were available to rent. So we had to do our event before the sun went down. Initially I was worried this might hurt attendance, but it didn’t. We had our event from 6:00-7:15 and that was plenty of time.

At first I thought that we really wouldn’t need water, or we could find a way to get water to the location, but I decided it was essential, and it was. My recommendation is not to do this event without access to a water hose. More on that later…

Pick a large location. On the night of our event, it turned out there were lots of children’s soccer and football practices where we wanted to do the event. Fortunately we picked a large enough park to find another spot.

Once we had the date, time, and location, we made a Facebook event. Here is what we posted: 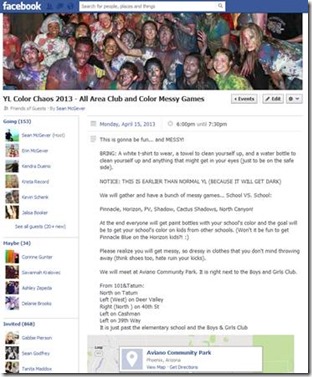 It is important to tell them to be prepared to ruin their clothes (including shoes). Tell them to bring three things: a white shirt, a towel, and a bottle of water. I checked with our girl leaders and my wife and after talking through the paint and such, they said that girls having white shirts would not be an issue since there really wasn’t all that much water and the paint actually helped things in that regard.

Once thing we didn’t do, but I would do next time, it to start promoting the hashtag #colorchaos for the Facebook/Twitter/Instragram pics and promotion.

3. Prep the Materials and the Event

The next step is to go out and get the supplies. In order to do that, you need to plan the event and make your shopping list. Here is our plan and list:

Here is a little more detail about the materials you will need to buy: 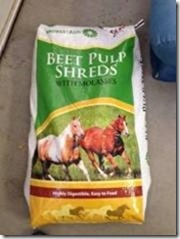 This is the stuff many YL camps use in the summer for messy games. You can get it at a pet food store, it is mainly used for horse feed so you may need to go to a pet food store for bigger animals. It is edible if needed, it expands when you add water, it washes off incredibly easy and it will blend right into the grass so no one will notice it afterward. It is also super gross. I bought a 40 pound bag for $16.99 and that was all we needed for our entire event for 175 people. We used this in the kiddie pool in the middle of the event and for the buckets for under over. Then the kids used it during the chaos portion to get each other. 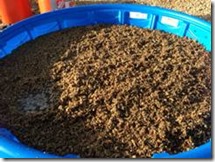 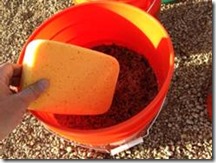 After talking to a few YL friends who did similar events recently (thanks Tanita Maddox and Chris McGuire!), I decided to use water bottles filled with tempura paint. I bought water bottles at Costco. Then I bought tempura paint, non-toxic and washable, from a local teacher supply store. I even signed up for their discount club and saved a lot of money. 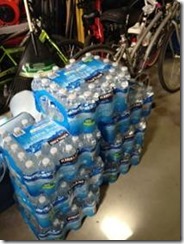 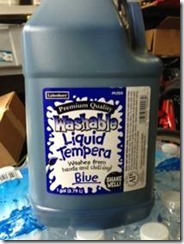 I experimented and figured out that an ideal ratio was 8:1 water to paint. This made the most of the paint while still having a strong color to be left on shirts. Using more water made the mixture too diluted, using more paint wasted paint (and increased the cost). I also picked school colors. All of the colors were available except one school needed gray. We mixed white with a little black paint. It kinda worked but it separated no matter how much we shook it up. Just an FYI. Making the paint bottles takes some time. It took two of us around three hours to make 175 bottles, so around 50 an hour. I’d suggest getting a lot more people to help to make it go faster. It worked well to have one bottle per person, but for next year I will double it up and have two bottles per person. The event really wasn’t all that expensive (less than $100 total), so we could easily add more bottles if I just get more people to help make them.

Here is a little bit about our process of making the bottles:

Our bottles were 16.9oz, so we would pour out a little bit of water, up to the top of the paper wrapping line on the bottles. 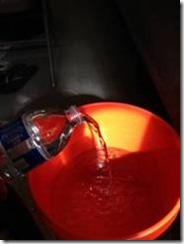 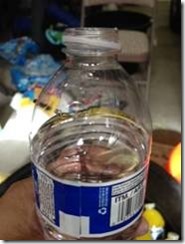 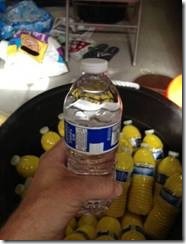 Then we would add two pumps of paint. We found that each pump was equivalent to one ounce. Then, we would replace the cap and shake for a second or two. 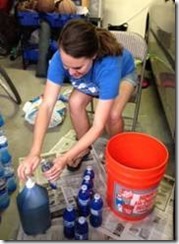 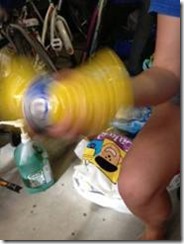 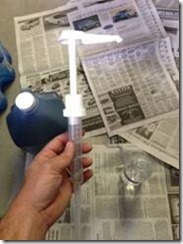 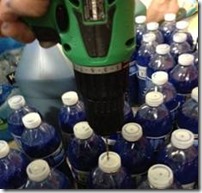 Last, we drilled a small hole in the cap. At first I picked a bigger drill bit, but my genius son Caleb told me we should probably use a really small drill bit. He was right, a small drill bit is much better.

As you can see from the plan above, we got to the location an hour early. When I arrived I realized the part of the park I wanted was being used by teams that were practicing. So we had to use another part of the park. Unfortunately, this was far away from the water, which was going to be a big deal to prep the beet pulp and clean people off at the end if needed. I said a little prayer and then noticed a lady walk out of her house across the street from the park. I went up to her and said, “In about an hour we are going to have a hundred or so high school kids for an event in the park. Have you ever heard of Young Life?” She said, “Of course, we support Young Life! We own the Chic-fil-a down the street!” Prayer answered, we used their water and hose to run the event. As a backup at the end of the event I had called the local fire department and they agreed to come and spray the kids off. I’m glad we had the hose because they did not show up (I bet they had something more important come up).

I had about 10 helpers arrive an hour early. Think “summer staff” at camp for messy games. I couldn’t have done it without them. We also had an excellent, and quiet, generator to power our sound system.

We set the area up like a big wheel with spokes for each team: 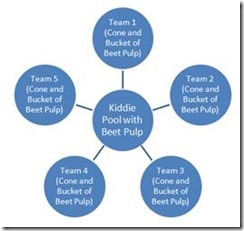 Then, as people arrive I told them to go to their school’s cone and start making a school cheer. When leaders arrived I gave them the blank team flag and spray paint (don’t give spray paint to students). This is fun, but also a way to kill time while we waited for everyone to arrive.

When everyone arrived, we pulled together, gave announcements, my good friend Tim Holman gave a fantastic talk (about 9 minutes), then we prayed and I explained the events.

Here are the events:

Everyone gets behind their cone. The first person lies down and the person behind them hobbles past them and then lies down. This repeats until the first person laying down (who is now last in line) gets up and runs over everyone else. We had them go out to the kiddie pool and then make a u-turn. This intentionally made a huge pile-up in the middle. It was chaos, and that is what we wanted.

Then we made team lines between the bucket and the kiddie pool. We had 3 sponges per team. The first person has to soak the sponge in the water-beet pulp and then pass it over their head, the next person goes under their legs and this repeats until the last person in line runs it to the front and repeats. We added in more sponges as we went along to add to the excitement. 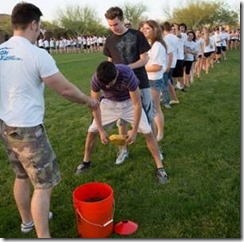 Then everyone got back behind their bucket and lined up. Then the first person in line would run out to the middle, dip their head in the kiddie pool full of beet pulp and then do 5 spins on a bat and run back to their line and sat down. Then the next person went until their team was done.

Finally, we had everyone get back behind their cones and then helpers delivered the paint bottles to the teams. Then the color chaos erupted! 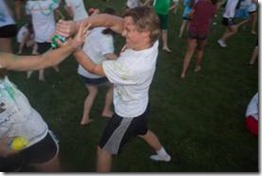 As the chaos is wrapping up, use the sound system to tell schools to go back to their cones for a picture. Also keep telling students the hashtag you mentioned earlier (#colorchaos for us). Then clean up very thoroughly. I had a neighborhood person who was watching the event. I’ve lived in HOA’s long enough to be able to spot the people who are on the board and who are always looking to fine people. I figured this guy was gonna go to town on me and tell me about how many fines we incurred. Instead he said, “Thank you so much for cleaning up so thoroughly, you wouldn’t believe all the teams and groups who use our park and leave it a mess. You guys are great and welcome anytime!” He went over to the Chic-fil-a lady and told her the same thing. It was a great way to be a light in the community by leaving it better than we found it. Then, of course, we posted a ton of pics and kids started tagging them right away.

This was our first year, so we have a lot to learn! Our main change next year will be to have more paint bottles, even though one was enough, two would be much better. A lot of new students came and were able to have a lot of fun and hear about Jesus. Praise God! Please send me any of your ideas, I’d love to learn from what you are doing!

smcgever (at) that google email address

5 thoughts on “The Complete Guide to Color Chaos”