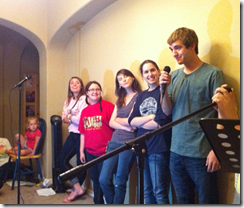 Last summer, my four year-old daughter Molly was taking swimming lessons at the local public swimming pool. The swimming teachers are usually local high school kids trying to earn some money over the summer. Like many four year-olds Molly gets a little shy at times, especially around strangers, and even more around strangers who are guys. That is when Molly met Collin (name changed). Collin had just finished his sophomore year of high school and was assigned to do group lessons with Molly. Almost instantly Molly hit it off with Collin. He was a great swimming teacher and has a great way of working with little kids.

Molly started talking about Collin quite a bit and would look forward to each swimming lesson. You should have seen how excited she would get when she saw Collin. That is when Molly started praying, in June, 2011. Every night, without my wife or I introducing the idea, Molly would pray that Collin would come to Young Life. And when I say every night, that means every single night. She remembered on her own. There are not too many things Molly remembers to do every day, but praying for Collin seemed to be at the top of the list. The swimming lessons ended in July, but the prayers kept coming.

The problem was that we didn’t have Young Life at Collin’s school. Some kids came to our club from that school but not many. That didn’t stop Molly. She didn’t concern herself with the barriers. She just prayed every night that Collin would come to Young Life.

So I guess you could say that it wasn’t too big of a surprise on April 16th, when a guy named Collin came walking through our door on a Monday night. Sure, someone invited him that knew that Molly was praying, but without Molly’s continued prayers and memory, it is very unlikely that a kid from a school with no YL and no friends in YL would end up at YL. During that club Molly sat up front and especially during the introductions, could not keep her eyes off him. Because she is so shy I don’t think she said a word to him. But do you want to know Molly’s prayer that night before she went to bed? It was, “Jesus I pray that Collin would go to campaigners.” No joke. Wow, that girl is relentless.

2 thoughts on “This Year… Molly Prayed Every Night”