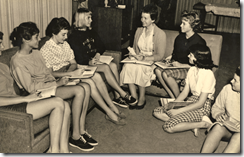 Over the years I’ve tried a few things to change the name of campaigners to something else: Wiffleball Wednesdays, Commandos (WL), and a few others. I’ve also heard of names like “Man Club”, “Super-Man Club”, “Breakfast Club”, “Brothers of Thunder”, and others. My friend Alex wrote up an article on one name that has worked pretty well and he explains why. I thought I’d share it with you. Thanks Alex!

Over the Summer of 2011 I announced to our Young Life club that we would no longer be calling our weekly Bible studies “Campaigners” anymore but now we would be calling it “Community.” The process of making this change took a while, but I really believe the change created some positive affects on our club and especially on our weekly Bible studies. About a year before announcing the change I tossed out the idea of changing the name at a team meeting, this didn’t go over so well immediately. We thought through a couple name changes, things like “Large Group,” “Small Group,” or “Home Group.” At the time my team didn’t like any of those suggestions, and my team, especially the Junior Leaders weren’t crazy about the name change. I tried explaining that the name “Campaigners” was incredibly outdated as it began as a term for those that “Campaign” for Christ. By no means am I against “campaigning” for Christ, but the term “campaign” isn’t exactly a term that’s tossed out in day-to-day conversation with our High School or Middle School friends.

I also believed that the name “Campaigners” didn’t do a decent job of really conveying what it is and why my high school friends and I gathered every Wednesday night. The method for “Campaigners” varies from club to club, but our group would gather Wednesday nights at one of our Junior Leader’s homes. Their parents would supply some snacks and drinks, we’d gather and chat for about twenty minutes, then gather together as a group, we’d each share our highs & lows for the week, pray and then hop into the book of the Bible we were studying that semester. While at the heart of all of those things are our hearts pursuing Christ as a group together, but we weren’t necessarily “campaigning.” As a the team leader for my club I saw a great need to emphasize community from the beginning of when I stepped into the position. I organized our contact work activities, and our Bible studies in a way that they created opportunity for communal growth amongst my leaders and our high school friends.

A year after initially tossing out the idea of changing the name of “Campaigners,” the idea of changing the name crept up into my mind again. The dynamics of our team had changed a bit since I originally tossed out the idea and we were all a little bit more open to innovative and creative ideas like this one (compliments to my awesome Young Life Team). I wouldn’t necessarily recommend how I went about making this change, but I will say that it ultimately worked really well (haha). One Wednesday night I made an announcement that next week we’d be making a change to things at “Campaigners,” I thought by building some momentum for the change might creative a positive outlook on the change, and would draw some of our usual kids to Wednesday night since we don’t typically make announcements like this. The one thing I did wrong was not consult anyone about this ultimate change, but I knew that if I tossed out the idea we’d never come to an ultimate agreement, and I’ll remind you, the change did still go really well. The Wednesday came, and kids were curious about the announcement. I explained the original meaning behind the name “Campaigners,” then explained my vision for our group that gather’s on Wednesday nights. I told our kids and my team that we’d be calling our Wednesday night gathering “Community” from now on, I was surprised at how well received it was! I made it a point to say that there was nothing negative about the name “Campaigners” and that I knew we’d still call it that in passing, but that as best as we could we’d try to call it “Community” from now on. Since then, I saw our kids truly understanding the vision for our Wednesday night gathering better, along with our High School in Cave Creek, Arizona better understanding what Young Life as a whole was all about, walking with Christ, sharing in life together, and loving on those that God’s put in our life.

One thought on “Another Name for Campaigners – “Community””