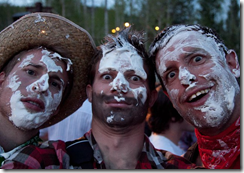 Over the years I have noticed a trend with the clubs in our area, the ones that have the most cash deposits in early always bring the most people to camp. Now I don’t believe “having a lot of people at camp” is the holy grail of YL work, and in all honesty it can become an unhealthy idol in our view of our ministry. Yet, I’m sure we can all agree that wanting lots of kids to go to camp is a healthy goal for our work. On the flip side, some of our clubs only make the push to collect actual money a few days before camp. These clubs always have lower numbers of kids at camp.

This year we tried something that I’m sure many of you already do, we gave an incentive to get the deposit in early. For our YL trip we matched up to $50 of a deposit that was in by April 15th. The deposit from the kids couldn’t be a fundraiser, it had to be actual money.

There was an important reason behind this. When you need actual money, parents usually have to get involved. So many times I’ve seen a kid be a part of several fundraisers, sometimes even earning a significant amount of money, but they don’t go to camp. Usually the culprit is they had none of their own money deposited. They liked hanging out at the fundraisers, maybe did some on their own, but they never had an actual sit-down talk with their parents to ask for the money. This happens less with junior high students since the parents are more in the loop, but this is common with high school students who may be pretty independent, until they need a few hundred dollars.

Our schools that normally bring a lot of kids to camp improved their numbers a little bit, but our schools with historically low numbers did significantly better with this approach.

Do you require a deposit by a certain date? Have you ever matched their money to incentivize signs-ups?