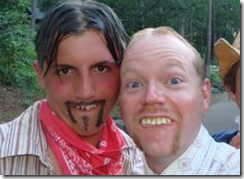 Here is an idea passed along by my friend Drew from Colorado. His friend Zach came up with an idea for follow-up from camp. Instead of putting a book into kids hands and asking them to read it. Zach is sending out an abbreviated version of a quiet time for kids to do a few times a week as a Facebook message to individual kids who started following Christ at camp. We’ve found this to be successful as kids are more apt to read things on the computer written as messages to them then a book.