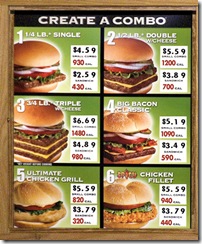 Here is a great idea from my friend Steve…

OK, Here’s the deal. It’s a club transition year for us. We have lost leaders due to marriage, grad school, etc. We also graduated our club core group. So we’re starting the year with new leaders, and a small core of kids who don’t usually invite their friends.

What do guys like? They like to eat and be rowdy. So we are using a contest idea from friends on the east coast. "Eat The Fast Food Menu Night." A couple of our leaders are assistant football and cross country coaches.

We plan to promo the Saturday night gig for two weeks. Get at least 60 kids to show up at the fast food place. (If it really takes off, we’ll buy the entire menu twice and compete against each other) My friend says it took about 30 minutes for 25 kids to eat the entire menu of a Wendy’s. We won’t charge kids, and we’ll give away tee-shirts.

That Monday, we plan to have our first club at the house of a junior guy who is well known and liked. We’ll show a video of Fast Food Night, do a couple club stunts, promo the following week as "coach Luke Night." (one of our leaders who was a division I QB) We plan to show his highlight tape. and finish it off with the ice-cream sundae in the gutter out in front of the house.

The following Monday, (at the same house) It will feel more like club, and we end by showing the highlight video, and the coach does the talk, inviting kids back the following week.

So, We hype a guy oriented event that is totally marketed to guys who have never come to club. The two meetings after the event are set up as follow-ups. We think the eating event will sell well, and the follow-ups will get the guys in the habit of showing up on Monday nights. That’s our plan.