I had the privilege to be with all of the camp speakers this summer. As part of this time they compiled their best talk illustrations. Many of them are time-tested ones many are familiar with. There were dozens of these. There were five that really stood out to me and I want to share them with you in this series of posts. I am also trying them in my club so I know how they work. I’ve used two so far, I’ll be using more soon. 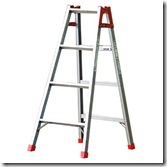 In this illustration you use a ladder to illustrate how people try to climb to the top in life or in Christianity or really anywhere. You have a ladder in your club talk. This is how I used it last Monday…

I told a story about how my dad has been absent and has a lot to make up in my life. I then transitioned into Zaccheus (Luke 19). It worked great because he was short and had to climb the tree. When I read that part I climbed the ladder and talked about how all of Zaccheus’ stealing left him with a lot work on in his life.

Then I told them how a lot of us feel like being a Christian has to do with going up and down based on our actions. I went to church this week (climb two steps up), but I cheated on my test (climb two steps down). I went on Work Crew (climb three steps up), but this weekend I was out of control (climb three steps down), and so-on, you get the point.

I then continued the story and highlighted that when Jesus wanted to eat at his house, what Jesus wanted was a relationship. I noted that Jesus didn’t immediately ask him to stop stealing. An ongoing relationship with Christ is more important than how high or low you are on the ladder.

I also took a brief moment to say that the ladder only counted when Jesus went up high on a cross (I climbed to the top) and gave up his life for ours (I spread out my arms like being on a cross).

It had the potential to be an A+ talk but for some reason I felt like I didn’t do a very good job, maybe a C+.

Let me know what you think about this…