I have two huge boxes full of notes and handouts from my time getting an MDiv in seminary. For some reason I can’t force myself to throw them away, but on the other hand, how often have I pulled them out to find a certain resource?… Maybe once. Maybe less. Meanwhile in 2003 I did a campaigner talk for three middle school guys, it wasn’t very good, and I have no idea what I said, but right now… actually NOW as I type I can get access to it with about ten keystrokes. Much of my seminary content is buried, other than the notes I took with this things called a com-put-er, while all kinds of less important stuff is right at hand.

This isn’t a commercial for Evernote, even as techie as I am it just didn’t click with me. But one thing that has helped me a lot is to organize all of my computer files carefully. In fact one of my original ideas for YLHelp was to simply create an online hard-drive so-to-speak for people to share YL information. Then they invented this thing called Dropbox, yet even Dropbox doesn’t really do it all. Rather than be theoretical, I’m just gonna tell you what I actually do with lots of boring specifics (decide for yourself, some of you actually like specifics, you know who you are).

Currently, all of my files (not my music or videos as they take up too much room) are within Dropbox. I’m sure you all have that already so I’ll skip explaining Dropbox. But I have found Dropbox extra helpful when I’m without my computer as I can look up a file on my phone. It also makes sharing a folder or individual file easy. I also backup all my files with Mozy, but Dropbox provides an additional redundancy. Since I work for YL, some of this will be more helpful for YL staff, but hopefully it will help everyone a little.

I have three main folders in Dropbox

1. Personal files (my eyes only)

3. Camp files (for team leaders in my area) 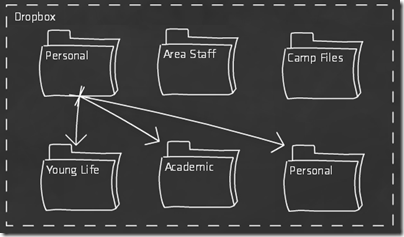 The reason they are separate is not only because some files are personal (financial information, donor information, just plain old personal info too), but also because within Dropbox people can edit files. This is great for collaborative files like updating a camp list, but it is rough when one of your volunteers deletes all of your fundraiser golf tournament info (lesson learned a few years ago, I’m glad for backup redundancy). This three-legged separation has worked great for me.

Below I’ve shown the basic structure of my folders within each Dropbox folder. I’m showing this because I’ve had multiple staff ask me about this (in addition to my email folder structure). There isn’t anything magical about it, but if you are a new on staff I can tell you that this structure is time tested and works well. It might even help you to think about how to organize your job, but I’ll save that for another day.

Lastly, I use a PC (and a hush went through the crowd…not to mention intense mockery) and I utilize a great tool which is free called Launchy. I believe it is similar to the Mac Spotlight feature. With Launchy I just hit Alt+Spacebar and then start typing the file or folder I want and it brings up a list of everything on my computer. To make it really helpful you should take a minute or two to set it up properly (which folders and files you want to search by default basically). It can also launch programs and much more.