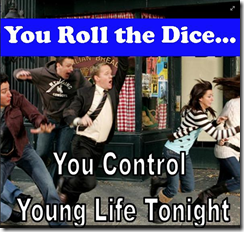 Here is a fun idea from Tanita Maddox from Santa Barbara. They called it “Roll the Dice Club”…

There actually isn’t anything super difficult or special about this club; it’s just a fun twist to do something different one night.

One thing that makes this a winner–we chose kids to roll the dice that we wanted up front, but were generally too shy or embarrassed to do an up-front game.

On the dice, you can put whatever you want to do that night. Some suggestions are: 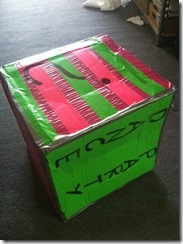 5. "?"  –  you can come up with a couple mysterious things that whenever this is rolled, something different happens (for example, we had leaders come in the room with trays filled with cookies and handed out cookies to kids)

**We made the mistake of putting "Message" on one side of the dice (instead of songs) and lo and behold, guess what was rolled first. I would not put message on the dice, and just keep the message at the end of club.

This is not a "blow your mind awesome" club – it is an alternative to "Backwards club" and a fun night to change things up. It was fun for leaders also to not know what was happening next — but on that note, don’t plan any games that take a lot of set up, because there is no time to set anything up 🙂