A while back we did “Kool-Aide” club (“oh, yeaaahhh!”). I pretty much didn’t have much more in mind than someone dressed in a Kool-Aide man outfit bursting through a fake wall at club yelling, “Oh yeeaahhh!” 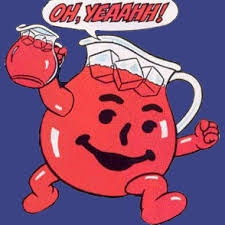 As it turns out, a Kool-Aide man outfit is hard to make, but we did work it into a video. The club plan was rather simple…

Pre-club: Have some kool-aide out for kids to enjoy.

Mixer: Mega Twister, so tape a few Twister games together. Then call out colors and body parts, but with Kool-Aide colors (ex: Blue Thunder!)

Participation Game: Something to do with sour pickles and kool-aide powder mix. I think this got a bit odd, so I don’t recommend it. I think I was in the other room doing something.

Skit: The fun video posted above.

Hope this is a fun one for you!