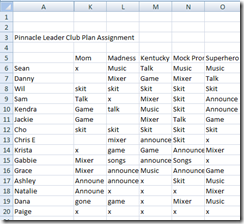 I have no idea why it took me this long to figure this one out. When our team puts together club plans, they are usually done months in advance. But I usually wait until two weeks before to assign all the roles (other than the talk, those are assigned much earlier). I know some club assign the roles for each club at the beginning of each semester, doing this would avoid the problem I always ran into.

I would get to the point where I would assign people for the different roles for club, but I would try my best to remember who has been doing what. I want leaders to get a chance to do a wide variety of things, rotate role basically. Also I don’t want one person to get pegged as the skit person, or the announcement person, etc. In the past few years our team has been bigger so usually two or three leaders wouldn’t have a role each week.

Well, I finally figured it out. I made a spreadsheet with everyone’s name on it and reviewed it when I did the assignments. This isn’t rocket science, but I think it did help me more effectively lead my team and give people well rounded leadership. It also gave me confidence to occasionally have someone not have a role in club, my spreadsheet would show me that they were the person who had the longest time since not doing something.

How do you assign tasks in club? Do you rotate roles?