At our most recent All Area Leadership meeting, one of our fantastic volunteer team leaders, Alex Devine, did a great lesson on how to balance relationships in YL. He used an approach that has been around for a while but continues to help frame a well-rounded approach to relationships in YL. I first heard of this approach from my friend Rick Wilson as the “circles of three”.

In this model you have three circles and at least three names in each circle. The three circles are 1) Contact Work, or kids who don’t yet go to club, 2) Club, meaning kids who go to club but not much more yet, and 3) Campaigner kids. If you can maintain a focus on at least three people in each circle, you will likely have a good, well-rounded, approach to outreach, gospel proclamation, and intentional discipleship (though all three of those terms have overlap themselves).

I have a couple observations about this, probably learned from Rick, and Alex covered most of these too for our leaders: 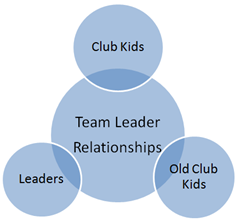 As mentioned before, I’ve seen this approach around for years, I guess now I can even say decades! [Wow, I’m old.] As I have been chewing on the idea in the last couple days I have been thinking how this might apply to other relational balancing. I think the team leader (or senior leader depending on what you call them in your neck of the woods), has another layer to consider. I added a few other circles: 1) Club kids [this would include all three circles above], 2) Leaders on the team, and 3) Old club kids. I’m sure there could be more circles to add as well. In my area the team leader has three responsibilities, the primary one is to be a top-notch example of a leader, so the “club kid” part should be on auto. Yet the team leader needs to pay attention to the leaders almost like their own special set of club kids. Finally, the team leader often has been around for a few years and therefore has ongoing relationships with students who are not in club any more.

Finally, I was chatting with my friend who knows a thing or two about developing leaders and relationships. He told me his key question he is asking leaders and staff right now is, “Who are your three”?” Meaning, who are three people you are pouring everything you got into them. Then asking those three people to have their three, and so on and so forth. This approach is laid out in Master Plan of Evangelism and elsewhere, but I love the simplicity of the question.

Have you used any approaches like these before? How do you balance your relationships in YL? What strategies work for you, or don’t work for you?