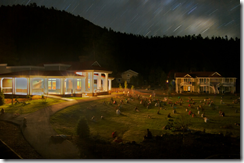 One of my favorite traditions in YL is the 15 (or so) minutes of silence at camp. Think about it (and stay with me here…), we have spent countless hours getting to know kids, we got them to sign up for camp, we helped them fundraise, we navigated them dropping off the list because their work “really needs them” the week of camp, the camp has spent millions of dollars to make it an unbelievable place, the work crew are sick because they have been working too many hours, the summer staff are still trying to figure out how they can make up for the money they won’t be making during the summer, the speaker has prepared, prayed, the program is on totally spent in every way imaginable, leaders have been leading cabin times, doing one-on-ones and then all of sudden… IT ALL STOPS. No one is working. No ride at camp is happening. No leader is leading. No one is doing anything, except sitting still, looking at creation (Ps 19:1) and maybe for the first time actually listening for God’s voice in their life. It is a great irony and great victory for the kingdom that historically our most powerful moment at camp is when we don’t add anything to the process. We stop.

This year, in a select number of club talks we gave kids a moment of silence after the talk. Of course the setting and setup of camp help a ton, but it isn’t rocket science and it might be the most reflective time a teenager has in their entire week.

An easy way to do this is in the middle of a talk, to help them engage in the rest of the talk personally, ask them a question to think about and give them an awkward amount of time. They won’t be fazed by 15 seconds, but it starts to get awkward after 30-45 seconds. Don’t cut it short. But also be sensitive that it isn’t too long.

Another good time to do this is at the end of the talk as a lead-in to the prayer. It could be just a twist on your “challenge” in your talk. For example, if you were talking about a healing that Jesus did in the Bible, you could say, “I want to give you 60 seconds of silence to think about one place in your life that you would like to see Jesus change or heal.” Like I said it isn’t rocket science. But I think we overlook these golden opportunities. Then it is easy for a leader to ask later that night, “do you mind me asking what you were thinking about that question during that silent time?”

How have you used silence in your local club?

PS… Amazing pic above from orlovichphotography.com