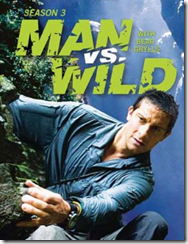 My friend Amber from Malibu (California, not the resort camp where none of us can ever get assignments, work crew or summer staff at…But I’m not bitter) sent this great club idea along. If you didn’t catch the title, it is a spin on the Man vs. Wild TV show.

For our Man vs Wyld…Life club we met at a park (you could probably do this in a large backyard) after dark. Everything was done in extremely limited light or else in the dark. We had battery operated lights (they have strobe and spot lights that are surprisingly powerful!) from the dollar store that we used when we needed light. After playing sardines we brought kids to a lit place in the park for the rafﬂe, announcements, new kids and club talk. I think you could do a cricket spit or gross food games with this club theme…our kids won’t do that so I didn’t put it in, although I think it would’ve been funny! We had a lot of fun and it was a really easy club to pull off. Make sure if you do it at a park that you get a permit so that the park ofﬁcials and/or police don’t kick you out of the park after dark. Whenever a kid didn’t want to do something I would simply tell them that Bear Grylls would do it…that was a pretty good motivator! We did the following games (see the file below)

PS Amber’s husband in a sitcom on TV… seriously!