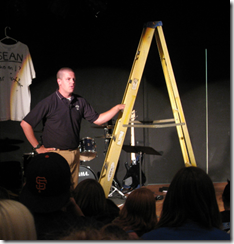 At summer camp we get to hear from some great speakers who are gifted, experienced and who have put a lot of time, prayer and study into the messages. It would be great if we could list some of the best illustrations or examples that we heard in the club talks this summer. It could be really useful for our club talks during the school year.

While I was at camp, the speaker used “cardboard testimonies” near the end of the week to illustrate the change that can happen when Jesus comes into your life. A person would come out with a piece of cardboard and on one side it would say something from their past (ex: fatherless), and then they would flip it over and it would say what has happened since then (ex: heavenly father). I thought this was an excellent illustration for those who were considering starting a relationship with Jesus.

What did you see this summer that was good? Put it in the comments on this post.