So the results are in! YL camps are by far the nicest resort camps in the world. It really doesn’t matter what a camp has, if it is Christ-focused, a patch of dirt is all that is needed (I’ve run a few camps like that and can attest that the results do not rely on the camp itself). With that being said, if you are going to have a camp then it may as well be great. It was Jim Rayburn who said, “Who started the idea that Christians have to camp in tents? We talk about the King of kings; let’s act like He’s in charge! We’re going to have the classiest camps in the country " (It’s a Sin to Bore a Kid: The Story of Young Life, pg. 46). It is clear that we have the “classiest” camps! With my friends we don’t even call them camps, we call them resorts, and once they get there they agree.

So without further delay, here are the results: 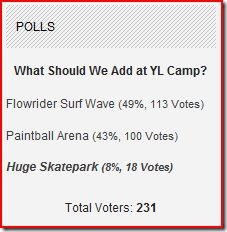 If you don’t know what a flowrider is, you should check it out. They are sweet. I’ve seen them on the boardwalk in San Diego and I see them advertized on TV commercials on cruise ships. It definitely brings the “wow” factor! It is a great option for a summer-focused camp. I’ve seen little kids, maybe 6-7 years old have fun trying them over and over.

As for paintball, I’m sure there is a legal risk, but if you think about some of the other things we do (ropes course, zip line, blob, etc.), it normally is something we embrace rather then dismiss. It might be more of a draw for guys then girls, but I think a lot of girls would enjoy it. 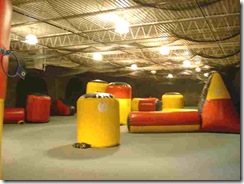 Last, I don’t think that the skatepark got the respect it deserves. I spent over a month at Oakbridge last summer and kids love the skatepark there. One leader told me it is the only reason they came to camp. Between XGames, Dew Tour, Fuel TV, etc… there is so much draw in this.

Much respect to our property friends who are working every angle every single day to have the best camps in the world. They are way beyond this survey, they have thought through these ideas years ago. Lets just keep our eyes open to the best ways to keep our camps on the cutting edge.

One thing I didn’t do… I didn’t ask for other ideas, I only gave you three options. What would you add to YL camps?