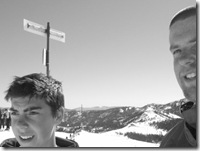 This year I had the opportunity to speak at a snowboarding camp in Northern California. They were nice enough to take care of my arrangements, but I thought I’d push my luck and see if they had room for me to bring one of my club kids with me. And they said yes! (Thanks SVYL!)

It was an incredible move. First, because he felt really valued and special that I asked him. Second, we got to go to camp. Third, it gave him vision and a behind-the-scenes look into what we do. Also, the group of kids and leaders said it gave them a cool example that they want to do themselves.

I have no idea if I’ll be asked to speak somewhere like that again, but it could work in all kinds of situations. Think this way… If I am going out of town, can I bring a club kid with me? You might only do it once a year or every other year, but it is certainly worth it!