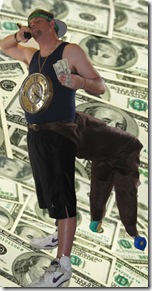 Yes, that is the meatiest hottest centaur you have ever seen huh? Think about it, combine the mass cultural demand for centaurs (among the crowd that lives in comic book stores on weekend nights for get-togethers) and the hip hop urban crowd and you pretty much have every single person at a high school covered. This is the brainchild that brought 50 Centaur, half horse, half rapper to fruition. No actually it was Bree, Andrew and Jory from SVYL who told me about a Woodleaf program a few years ago. But who cares about details?

I’ll give you just a taste of his mad game…

I had a MySpace Artist page that had over 1000 views in 3 days, but Tom took it down. The only reason I can figure is “impersonating” a real person. Hmmm.If that doesn’t work, look hereBTW, last Monday I was 50 Centaur at club, on Tuesday I graduated with an M.Div from Phoenix Seminary… This only happens in YL. 🙂